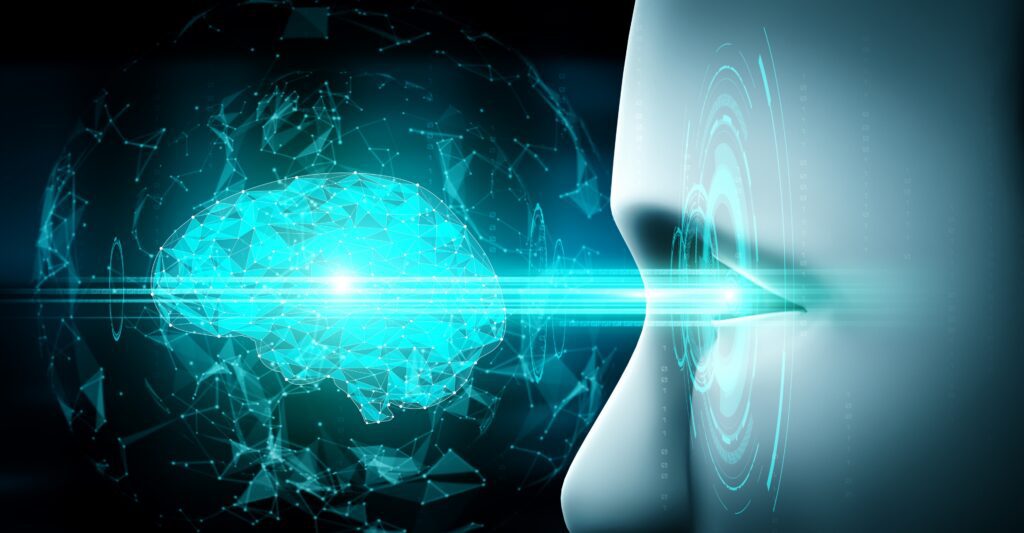 Machine vision also known as computer vision is one of the exciting applications of artificial intelligence (AI). Machine learning algorithms that are able to detect, understand and differentiate images and videos. This is key behind many innovative industries around the world like healthcare, autonomous, self-driving vehicles to smart industrial machinery and even most likely used in your smart phones, the image filters.

Just like we do, it also have Language processing abilities (Natural language processing) its fundamental to our efforts to build machines that are capable of understanding and learning about the world around them. Generally, it involves use of deep learning, neural networks trained on thousands, millions or billions of images until they become experts at classifying them accurately using AI Vision Model.

The value of the market in computer vision technology is predicted to hit $48 billion by 2023 and is likely to be a source of ongoing innovation and breakthroughs throughout the year.

So let’s take a look at some of the fascinating trends and technology:

Data-centric AI is based on the idea that equal focus should be put into analyzing, optimizing the quality of data used to train algorithms, as is put into developing the models and algorithms themselves. Championed by Andrew Ng (renowned pioneer of deep learning), this emerging paradigm is relevant across AI disciplines but particularly so in the field of computer vision. Some of the first deep learning-based based image recognition models were developed by Dr. Ng at Google, with the purpose of training computers to recognize pictures of cats, and they are particularly dependent on the quality of the data they are fed, rather than just the quantity. This focus on iteratively improving the quality of labeling – using automated techniques of extracting and labeling data will allow computer vision technology to be applied to problems, potentially lowering the cost, computer resources and opening up many new potential use cases.

Computer vision at the edge

Edge computing is a distributed information technology (IT) architecture in which client data is processed at the periphery of the network, as close to the originating source as possible. In simplest terms, edge computing moves some portion of storage and compute resources out of the central data center and closer to the source of the data itself. Rather than transmitting raw data to a central data center for processing and analysis, that work is instead performed where the data is actually generated, eg: whether that’s a retail store, a factory floor, a sprawling utility or across a smart city. Only the result of that computing work at the edge, such as real-time business insights, equipment maintenance predictions or other actionable answers, is sent back to the main data center for review and other human interactions.

Increases in speed that can be achieved, edge computing in relation to computer vision has important implications for security, an important factor to consider as businesses. With edge devices such as computer vision-equipped security cameras, data can be analyzed on the fly and discarded if there is no reason for it to be kept, for example, suspicious activity detection.

Shopping and retail are other aspects of life where we are sure to notice the increasing prevalence of computer vision technology during 2022. Amazon has pioneered the concept of cashier-less stores, equipped with cameras that simply recognize which items customers are taking from the shelves.

As well as relieving humans of the responsibility of scanning purchases, computer vision has a number of other uses in retail, including inventory management, where cameras are used to check stock levels on shelves and in warehouses and automatically order replenishment when necessary. It’s also been used to monitor and understand the movement patterns of customers around stores in order to optimize the positioning of goods and, of course, in security systems to deter shoplifters.

Another popular use case involves allowing customers to get information on products by scanning barcodes using their mobile phones. In fashion retail, one particularly fun application of computer vision is the virtual fitting room, which allows shoppers to virtually try on items without touching them; cameras in the mirror simply superimpose images of the clothing on the mirror’s reflection, and can even identify products customers are trying on and suggest matching accessories to go with them.

Computer vision is an integral element of the connected systems in modern cars. Although our first thoughts might be of the upcoming autonomous vehicles, it has a number of other uses in the existing range of “connected” cars that are already on the roads and parked in our garages. Systems have been developed that use cameras to track facial expressions to look for warning signs that we may be getting tired and risking falling asleep at the wheel. As this is said to be a factor in up to 25% of fatal and serious road accidents, it’s clear to see that measures like this could easily save lives. Other proposed uses for computer vision in cars that could make it from drawing board to reality include monitoring whether seatbelts are being worn and even whether passengers are leaving keys and phones behind as they leave taxis and ride-sharing vehicles.

Computer vision also plays a big part in self-driving cars. Current thinking is that it will be the most important on-board element of autonomous navigation. Tesla announced this year that its cars will rely primarily on computer vision rather than lidar and radar, which use laser and radio waves, respectively, to build a model of the car’s environment.

Computer vision in health and safety

A key use case for computer vision is spotting dangers and raising alarms when something is going wrong. Methods have been developed for allowing computers to detect unsafe behavior on construction sites – such as workers without hard hats or safety harnesses, as well as monitor environments where heavy machinery such as forklift trucks are working in proximity to humans, enabling them to be automatically shut down if someone steps into their path. Preventing the spread of illness caused by viruses is also an important use case these days, and here computer vision technologies are increasingly being deployed to monitor compliance with social distancing requirements, as well as mask-wearing mandates. Computer vision algorithms have also been developed during the current pandemic in order to assist with diagnosing infection from chest x-rays by looking for evidence of infection and damage to images of lungs.

Chatbot – Design and Architecture
Cloud Migration – How to decide if you are ready?